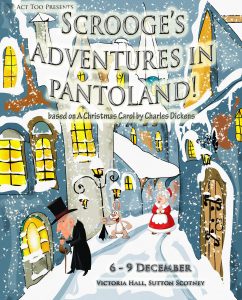 AUDITIONS !!! Oh Yes here are the details you have been waiting for!

Below is a list of the characters in this years pantomime, ‘Scrooge’s Adventures in Pantoland!’ It is based on Charles Dickens ‘A Christmas Carol’ so we suggest you watch ‘The Muppets Christmas Carol’ to get a sense of where we are coming from.

If you are at all interested in being part of this years panto either on or off stage it is essential that you come to one of the two meetings in July (Sunday July 1st 4-6 & Sunday July 29th 4-6: at the Victoria Hall) just to register your interest.  If children (over 8yrs old) would like to be involved they should be prepared to sing a few lines of their favourite carol.

CREW: The folks that make it happen and without you there is no panto. We need; Stage-managers , scene and prop supervisors, lighting, make up,  costume/wardrobe, front -of-house team for drinks, programmes etc.

ACTORS: We have made available parts of the script for you to read and prepare according to which of the major part(s) you are interested in. If you click on the name of the Character which is underlined it will take you to the link for the script.

If the part you are interested in does not have a link to a script ( by clicking the name of the character) it means they don’t have many lines but we DO NEED to see you to talk about the character.  And its likely we may ask you to play more than one part.

DAME SHELLY SMELLIE BELLIE.  The Panto Dame but also the narrator (M) This is a large part and on for much of the time and lots of lines! additional script link

EBENEZER SCROOGE . Old, grumpy and mean (M) A wonderful opportunity to play this role. It’s a big part, lots of lines and lots of ‘acting’ (and some over acting!) opportunities. Additional scripts for Scrooge can be found under Bob Cratchit, Fred, Ghost of Marley and Ghost of Christmas Past and Present.

YOUNG SCROOGE. A lovely young man (M) Not a big part but appears in two key scenes. This is the Scrooge before he became really mean although we can already see the signs!

BOY SCROOGE : An even lovelier young boy aged around 7 (M) Only in the one scene in Act 1 but with opportunities to play other parts throughout  the play.

BOB CRATCHIT . Scrooge’s clerk (M) A wonderful part. Poor Bob has a hard life. Not only is his boss, Scrooge, giving him a bad time but he has four children one of whom is very poorly.  He should get the sympathy vote by the audience. Quite a big part. additional script link

MARY CRATCHIT . (Bob’s wife) (F)  A great support to Bob.  BUT with four kids and no money she can often be a bit “hyper!”. Perhaps underneath there is a bit of a tiger! Quite a few scenes and quite a few lines!

MR FEZZIWIG (Kind merchant and Scrooges old boss) (M)  Could be Irish. Larger than life character. Only in the one scene with few lines but should steal it!

MRS FEZZIWIG (F)  Another of these cameo parts that allow actors to go wild. No lines but once seen ……..

SARAH, HIS WIFE (F) (rather stereotypical costume drama leading lady) Victorian young woman. But what lurks under that Victorian facade?

GHOST OF JACOB MARLEY(Possibly Scottish and camp.  Definitely one for histrionics) (M)

GHOST OF CHRISTMAS PAST  (Spirit Past) (M/F) Well, don’t tell your friends but this is a rabbit! Yes a rabbit. Think American cartoon rabbits and take it from there. Biggish part

GHOST OF CHRISTMAS PRESENT (Spirit Present)  ( F) Another bit of a secret. This is Mrs Santa Claus. Poor Scrooge is having a hard time. Biggish part

GHOST OF CHRISTMAS YET TO COME.  (Spirit Future)( M/F)  Yes you’ve got it. The Future! It can only be Darth Vader. Scary. No lines but a heavy breather. Be good for a tall person.

SITASCRATCHIT WOMEN  The four women from Sitascratchit. You might remember them from Jack and the Beanstalk.  Well they’re back and have had two years to mature into something quite outrageous!  They are …..

BELLE as a young woman . (The Mrs Scrooge that might have been) (F)